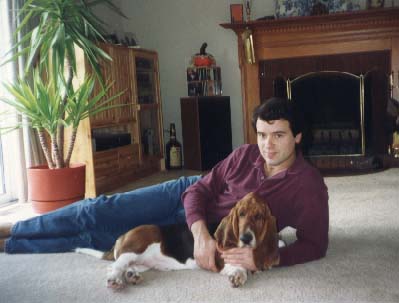 "One gray night it happened,
Jackie Paper came no more,
And Puff that mighty dragon king,
He ceased his fearless roar"
-- Peter, Paul, and Mary

Elvis could light up a room simply by walking in and wagging his tail,
He could warm my heart and make me smile no matter what with just a cuddle,
He truly enriched our lives as well as those of everyone that he met,
His unquestioning, unjudging, and constant love will be sorely missed.

Even during his final weeks when he was undoubtedly in discomfort,
He never failed to greet us with a warm heart and a wagging tail,
To the end, he was a hunk of burning love,
Four-legged perfection.

He taught me patience and tolerance,
He taught me joy and happiness,
His passion for those that he met always shined through,
His pure joy of being with the ones that he loved was his essence.

Wherever you are, my little guy,
I hope that there is no shortage of doggies and bunnies to chase and play with,
To smother with sloppy Basset Hound kisses,
Hugs, wags, and aroooooooooos forever, my precious one.


We are deeply saddened to report that Elvis passed away ("crossed the Rainbow Bridge" in Basset parlance) on 19 December 1999, due to an advanced melanoma that was found in his throat.  To the end, Elvis was a perfect Basset Hound and will forever be missed by all that knew him.

Elvis was a tri-colored Basset Hound, descended from a champion bloodline--although he was always way too cool to worry about that stuff too much.  His breeder's registered name is "TC Noteable Basset Hounds" and his official name is "TC Noteable's Elvis".  He came into this world on 16 April 1992 and came into our house on 7 July 1992.  Our lives were forever enrichened by having the honor of being his "slaves" (as Bassets like to refer to their human companions).  Elvis's dad was "Oak Park's Me and Bobby McGee" (aka Bobby) and his mom was "Oak Park's True Colors" (aka Trudy).  All four of his grandparents were champions--"CH Stonewall Chances Are & CH Oak Park's Heaven Sent" and "CH Stonewall JFK & CH Oak Park's Jacklene".  Go back another generation and you'll find "CH Beaujangles Ten", among others.  It was due to these musicly associated names (Bobby McGee and Beaujangles) that we decided to name Elvis after another somewhat famous musician.

For those of you that are seriously interested in a Basset Hound, I would gladly recommend "TC Noteable Basset Hounds" as a breeder, although I have it on good authority that they are no longer in the Basset breeding business.  However, they're located in Hubbard, Ohio, which is right outside of Youngstown.  Contact Carol Cooksey at 216 534 7915 for more information.  I'll point out that Bassets are high maintenance critters, in my opinion; they, however, return every bit of love and effort with interest!  There is no one so lucky as a Basset slave!